Call for an appointment

After a few short questions, our colleagues from the contact center will connect you with one of Dr Schröder's assistants. You can contact them to make an appointment. Call 010 4361537 or click the button below for more information!

Toys for boys of revolutionaire doorbraak?

For as long as mankind has existed, innovations have been met with distrust. So naturally, the added value of robot-assisted surgery is attracting some debate, both in the media and among surgeons. The question asked is – do such robots actually add anything to the surgical experience, or are they simply toys for technology-addicted boys? Do they actually benefit patients? And is their use cost-effective? Such assessments have thus far failed to demonstrate conclusively that the Da Vinci robot used in prostate surgery has much added value. (See this article in Medisch Contact of 16 May 2014 for more information on this subject.) However, there is more to robot-assisted surgery than just this one use.

Seven years ago Israeli company Mazor Robotics developed a robot to be used in spinal surgery. This small robot, which is the size of a can of Coke, helps surgeons place pedicle screws in a highly accurate manner. When I started working at Bergman Clinics 5 years ago, they purchased such a robot at my recommendation. The results have been nothing short of astounding. I’ve now used this robot in about 140 spinal operations, meaning it has placed 4x140=560 screws. Out of these 560 screws, only one had not been placed ideally. This is an incredible success rate, which can definitely be attributed to the software that makes this robot so uniquely effective. 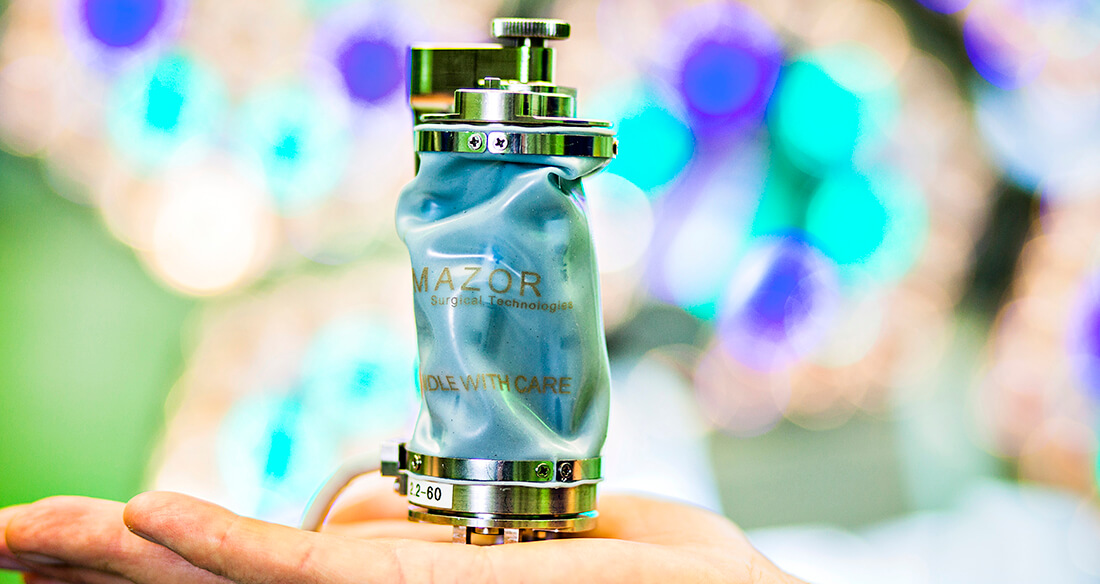 The precision with which this device does its job exceeds any other clinical results involving a surgeon choosing the direction of the screws without using his hands, i.e., without robot-assisted navigation. This being the case, use of this mini-robot reduces the number of operations that have to be repeated because screws that were not properly implanted the first time round must be removed. This saves patients some discomfort and helps us save money. Another advantage of this robot is that it can be used in minimally invasive surgery involving screws being inserted through tiny incisions in the patient’s skin. In addition, surgeons using a robot require less X-radiation while performing their operations, which is healthier for both doctor and patient.

Five years ago I was the first surgeon in the Benelux countries to use this robot. The only other people using it at the time were a few surgeons in Germany, Israel and the United States. By now over one hundred of these robots have been sold to American hospitals. A little while ago I was asked to give a presentation on my experiences with the Renaissance robot in Shanghai. I was received with great acclaim, and telling 500 spinal surgeons about my practice in Naarden, a town whose name most people present could not even pronounce, was an impressive experience.

By now a second generation of this robot has been released. You know how these things go – you’ve just bought yourself a new iPhone, and a new version will be released. However, I can keep my iPhone for free once I’ve been on a plan for 2 years, whereas this new robot will set the clinic back about half a million euros. I don’t think Santa Claus will give me one if I ask for it. And as far as I’m concerned, the results of my first-generation robot are still so groundbreaking that I won’t mind working with my loyal metal assistant for a little while longer.

Dr. Schröder is happy to inform you about the surgical treatment of your neck or back condition. He also discusses the possible complications of the procedure with you.

After you've carefully weighed up the pros and cons of the surgery, you can decide for yourself whether you consider your condition serious enough to operate.

Nearly all treatments performed by Dr Schröder are covered by health insurance. This is true for the following conditions: neck hernia, spinal hernia, lumbar spinal stenosis and cervical spinal stenosis.