What is cervical spinal stenosis?

Anatomy of the spine

The spinal column is located at the heart of the musculoskeletal system. It consists of 7 cervical vertebrae, 12 thoracic vertebrae, 5 lumbar vertebrae and the sacrum. Intervertebral discs are located in between the vertebrae, and these 23 discs increase the spine’s elasticity and mobility. They also serve as shock absorbers.

The spinal canal is positioned at the centre of the spine. Vertebral arches (with spinous processes) are located at the back of the canal. Although spinal stenosis can occur at any level of the spinal canal, it most commonly occurs in the neck and the lower back. 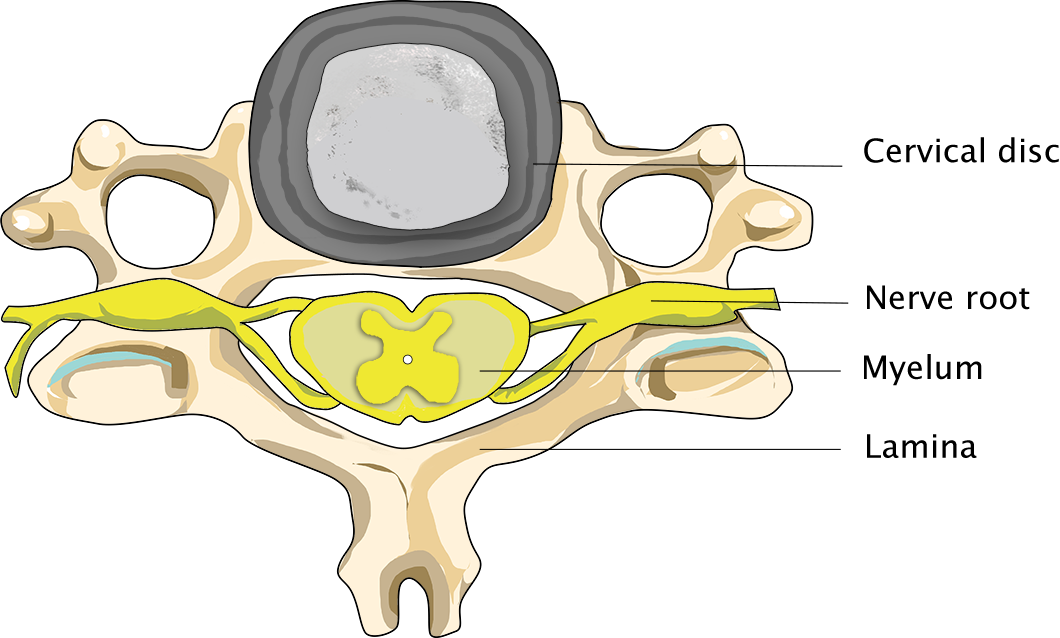 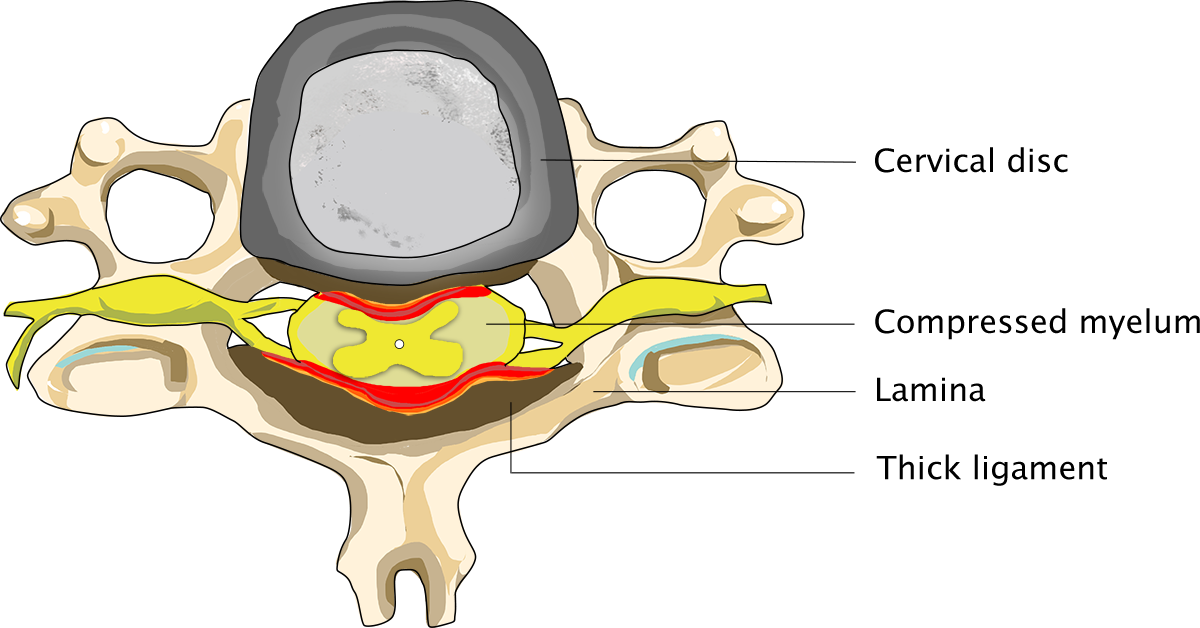 Use the overview below to read more about a specific topic:

Causes of a cervical spinal stenosis

Degeneration or arthrosis of the spine

Degeneration of the spinal column is a normal process to which everyone is prone to some degree. Some people naturally have a narrower spinal canal than others. Elderly people’s spines are especially prone to degeneration.

Arthrosis is a normal symptom of ageing which everyone will experience to some degree, although some people are more prone to it than others. As you will know, arthrosis affects all sorts of joints, such as hips and knees. The vertebrae and discs will respond to arthrosis by proliferating. They will grow thicker, especially at the level of the spinal joints, where they will cause thick ridges to develop. This process may occur at any level of the neck, but it generally happens at several levels at once. Needless to say, such ridges or bone spurs will narrow the spinal canal and gradually increase the amount of pressure exerted on the spinal cord. In some cases, a bulging intervertebral disc will add to the stenosis.

Degeneration may also narrow the openings through which the nerves branch off the spinal canal. Since these openings are not particularly wide at the level of the cervical spine, the nerves governing the arms will soon be compressed. Moreover, the bands of connective tissue (ligaments) will grow thicker, thus leaving even less room for the spinal cord and nerves in the stenosis-affected spinal canal. The amount of room that ultimately remains available for the nerves and spinal cord is determined by the extent of the degeneration and the width of the canal, which differ from person to person.

Symptoms of a cervical spinal stenosis

When the spinal cord is compressed, movement and sensibility disorders may occur, causing patients to lose control of the movements made by their legs and causing them to start staggering and swaying. On the one hand, this is caused by the fact that such patients suffer reduced strength in their legs (which is known as paresis of the leg muscles); on the other, it is caused by the fact that they tend to be less able to sense the position and movements of their legs.

BIn addition to their partial inability to sense the position of their legs, patients also tend to be less sensitive to touch. Due to reduced sensation in their feet, they may feel as though they are wearing socks when walking, even when they are in fact barefoot. Furthermore, their loss of strength (paresis) will be of a spastic nature, which is to say that, despite having lost strength, their legs will not be flaccid, but rather stiffer than usual, causing them to feel as through they are sticking to the ground.

In addition to a motor disorder and reduced sensation in their legs, patients may also suffer urinary incontinence, which is to say that they do not control their urinary bladder and may lose urine at inconvenient times.

Shooting pain in the back, like an electric shock

Another symptom that is sometimes reported is a shooting pain in the back whenever the patient flexes his or her neck forward, as if the patient has received an electric shock. Like the aforementioned symptoms, this can be a sign that the spinal cord is being compressed. If the pressure on the spinal cord is not relieved, it may result in a complete interruption of the cord, i.e., paraplegia, which is characterised by complete paralysis and numbness of all parts of the body that are below the level of the damage. However, few patients ever reach this stage.

How it differs from a neck hernia

Since the aforementioned pain and symptoms resemble those of other spinal cord conditions, such as multiple sclerosis, a neurological examination and imaging tests will be required to help the neurologist make the right diagnosis and provide the right treatment.

Diagnosis of a cervical spinal stenosis

X-ray image taken from the side

The neurosurgeon will listen to the patient’s story and conduct a thorough neurological examination, then perform some imaging tests. An X-ray image of the cervical spine taken from the side will generally show the narrowing of the spinal canal, as well as the presence of the bony ridges that may have caused the narrowing.

MRI of the lumbar spine

Generally, the first examination to be performed will be an MRI scan of the lumbar spine, which will typically show the abnormality in considerable detail. MRI scans are a very useful tool in that they provide an insight into the ratio between the spinal canal and the spinal cord. In normal persons, a thin layer of cerebrospinal fluid can be seen at the front and back of the spinal cord, which surrounds the cord like a moat surrounding a castle. If sufficient fluid can be detected in the scan, there is sufficient space within the spinal canal. 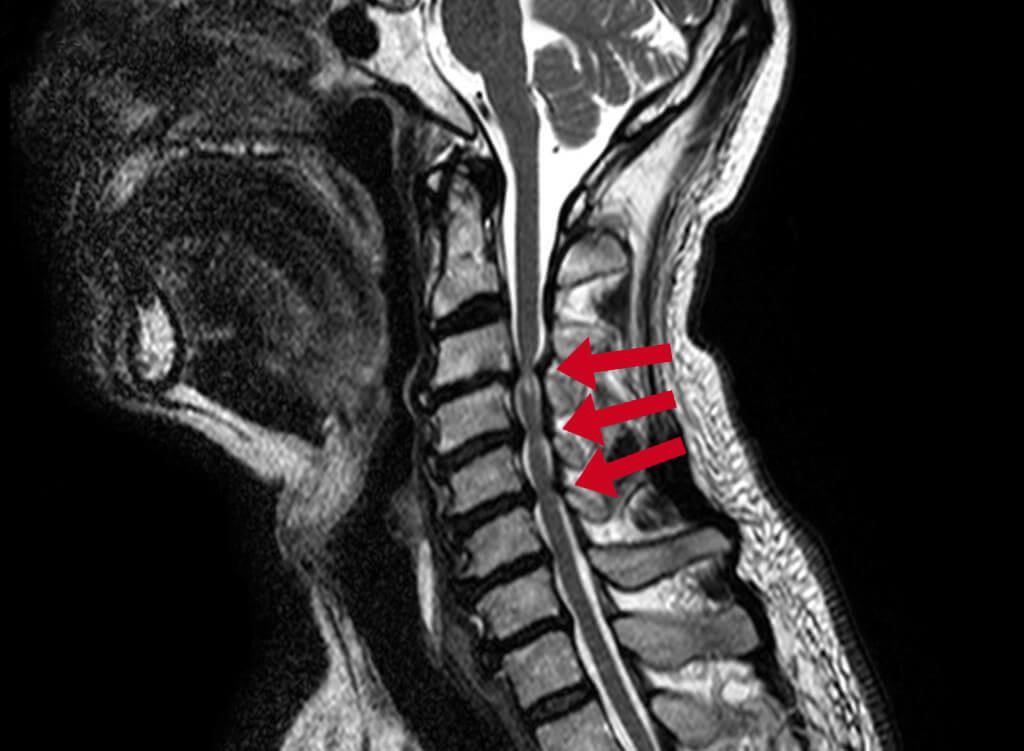 Diagnosis of a cervical spinal stenosis

In patients suffering from severe stenosis, the anterior bony ridges may reach the spinal cord and dent it. An MRI scan will show whether the compression of the patient’s spinal cord has damaged the cord (myelopathy).

Surgery of a cervical spinal stenosis

In itself, degeneration of the cervical spine is no ground for surgery, since many elderly people’s spines show signs of wear and tear, even though most of them do not experience pain or symptoms of spinal cord compression.

The presence of discomfort is not considered a ground for surgery, either, as long as the level of discomfort remains stable. However, if the patient begins to experience more discomfort, or if the scans show signs of spinal cord compression as well as other types of compression, or if the patient experiences an acute deterioration of his condition, a neurosurgeon will have to intervene, in order to prevent the situation from getting worse in the future.

IThe purpose of a cervical spinal stenosis operation is to create more space for the spinal cord. In order to remove the stenosis, the patient will be operated on from the neck. This procedure is called bony decompression and involves making an incision in the middle of the neck, exactly at the level of the stenosis. From here the vertebral arches will be opened in the middle, between the neck muscles, and excess connective tissue and bone tissue will be removed, so as to relieve the compressed spinal cord and the nerves branching off the cord.

Previous results have indicated that patients should be grateful if their level of discomfort does not get worse. While most patients feel better after the operation, some patients’ condition fails to improve, and other patients actually feel worse after the operation. In cases where patients do not feel better following surgery, the blood supply to the spinal cord has probably been disrupted to the point where surgery is ineffective.

So what happens when I undergo surgery?

Click the button below for some general information on operations performed by Dr Schröder.

Even so, we may encounter some neurological failure after the operation. This is generally caused by the fact that the nerve, which had been compressed for a long time, had to be manipulated during the operation. Common risks also include inflammation or a wound that will not heal properly. Subsequent bleeding is a very rare but highly unpleasant complication.

After surgery of a cervical spinal stenosis

Surgery is by no means certain to relieve the patient’s symptoms. In a great number of cases, preventing the symptoms from getting worse is the best result that can be achieved. It appears that damage to the spinal cord cannot be undone.

Tips from a physiotherapist

Following the operation, the wound at the back of the patient’s neck is likely to be painful. The patient’s follow-up appointments will be with a physiotherapist, who will provide some useful tips to help the patient load his back and make a full recovery while the patient is still at our clinics. Typically, patients are able to walk again the day after their operation. They are free to go home, then, depending on the size of their wound. Rehabilitation therapy will only be necessary in the event of severely impaired walking.

Two weeks after the operation, the patient will be called for a phone check-up during which his or her current condition will be discussed. Generally, the patient will be told on this occasion that s/he is allowed to resume normal activities and increase the load on his or her back. If the patient is already experiencing a clear improvement, no further steps will have to be taken at this point.

Resuming exercise and returning to work

The patient will be allowed to undergo supervised physiotherapy upon his or her discharge from the clinic if s/he is in a poor physical condition or afraid to start moving again. Embarking on an intensive neck muscle training programme soon after the operation is not recommended, as the neck muscles will not have full pulling force for the first 3 to 6 months following surgery. The duration of the post-operative recovery period differs from patient to patient. Whether or not a patient is allowed to return to work soon after an operation obviously depends on the nature of the person’s duties. Patients should always listen to their bodies and take a break whenever their bodies tell them they have had enough.

Many patients like to share their experiences with people who experience similar conditions, but have not yet had surgery.

Read some of the patient testimonials treated by Dr Schröder.